Designing Kickstarter Rewards and Add-Ons with Logistics in Mind

Octa ran its first Kickstarter campaign in January 2013 to fund the Monkey Kit.  The Monkey Kit is part of the TabletTail accessories system, which includes modular parts that can be paired to hold any tablet in any position.  Partway into the campaign, Octa decided to offer another TabletTail component—the WhaleTail—as an add-on reward.  The WhaleTail is a cute and compact tablet handle and stand; we were excited to make it available to our backers.  Unfortunately, the choice to offer this add-on greatly complicated our Kickstarter reward fulfillment.

Before designing your Kickstarter campaign, it’s important to understand the Kickstarter user interface.  As a backer, you’re able to manually set your pledge amount but you’re only able to select one reward tier.  Within that reward tier, you can’t specify a quantity.  Since you can’t specify a quantity, if you’re an international customer, you aren’t provided a shipping cost relative to your real selection.
Let’s work with an example.  Amy is a backer of Octa’s current campaign.  She’d like to order a Lynx for herself and two Spider Monkeys for her daughters.  She selects the Lynx reward tier and then manually over-pledges the cost of two addition Spider Monkeys.  She’s off to a great start, but we’ll come back to her.

As a project creator, when your campaign is complete, your main tool for Kickstarter reward fulfillment is the Backer Survey.  Backer surveys are sent by reward tier and can only be sent once.  They’re composed of single-answer multiple-choice questions and unrestricted text fields.

The survey for the TabletTail campaign might ask the following:

So now, as a project creator, you need to crosscheck each backer’s rewards selection against his or her pledge total.  Amy pledged correctly for her rewards, but she lives in France.  She didn’t read the FAQ, which is understandable.  They’re at the bottom of the page!  As such, Amy did not manually increase her pledge to account for the additional cost of shipping two Spider Monkeys. 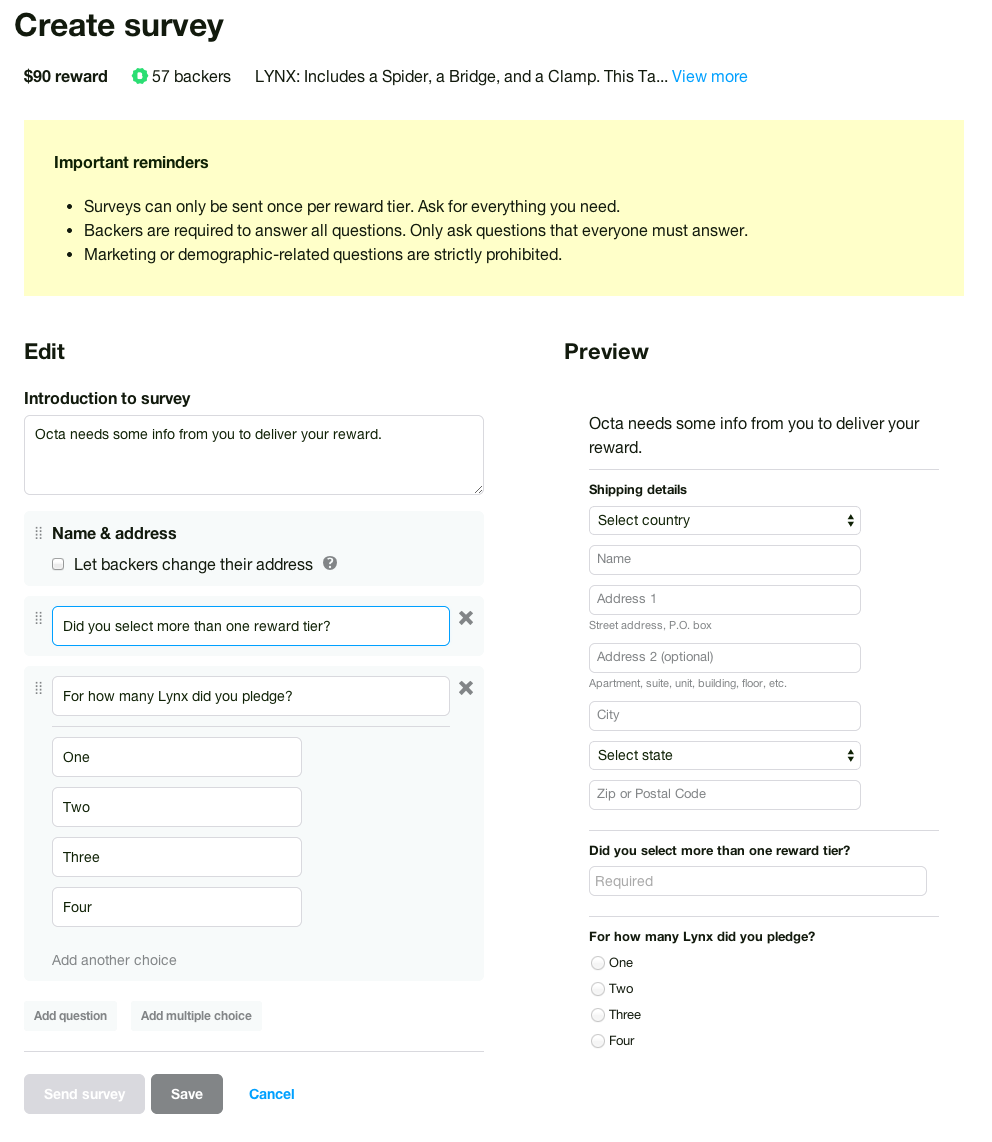 As a project creator, you have two choices.  You can subsume the additional shipping cost that, for a reward as large as the Spider Monkey, would be $35 a unit to France.  Or you can send Amy an invoice and manually collect the difference.  Most businesses, ours included, would be forced to choose the latter!  It’s time consuming and, frankly, awkward.  No one likes to get an invoice after the fact.

The tools available for offering add-on rewards are much the same.  As such, add-ons can further complicate Kickstarter reward fulfillment.  A project creator can (A) use a third-party tool like BackerKit, which takes an additional 1-2% percent of the project’s funding, or (B) have backers manually increase their pledge totals and note their selection.

During the Monkey Kit campaign, we opted for the latter—a common choice—sending a message to all our backers: “if you’d like to add a WhaleTail to your reward, manually increase your pledge by $15.”  Some of them did.  No problem!  But some didn’t get our message.  Whose email inbox isn’t full already?

When we sent out our Backer Survey, some said, “How come I didn’t know I could add on?”  “Is it too late?”  “I thought the add-on was free!”  “I didn’t know these add-ons would increase the cost of international shipping!”  Enter the cycle of messaging and manual invoicing.

When your Backer Survey is returned, you’ll get one CSV file per reward tier.  Your questions will be the column headers and each backer’s answers will run across a row.  Before beginning Kickstarter reward fulfillment, the project creator should check the pledge totals against the rewards selection.  This can be done in Excel by assigning dollar values to each reward and each add-on, adding fields to multiply those values by the quantity selected, and subtracting the shipping total and calculated values from the pledge total.  Conditional formatting can be used to flag values above and below zero, which represent over- and under-pledges.  Just make sure you asked all the necessary questions  your first survey; you won’t be able to resend it.

Checking the pledge totals is doable.  It’s the follow-up that’s difficult.  By nature, every manual adjustment a backer has to make is an opportunity for human error.  It took Octa’s full-time in-house customer service manager over a month to process all the clean up from one add-on reward.  Our current campaign includes a total of seven components, five of which have been requested as add-ons.  While it’s our strongest desire to offer each backer a personalized configuration, we’ve chosen four pre-configured TabletTail rewards for this campaign.  Customizable iPad stands and Android stands will be available later here at Octa.com.

The Future of Kickstarter Reward Fulfillment

Octa has benefited twice from the Kickstarter platform and its active, enthusiastic community.  For future projects, we’ll research the back-end tools available in platforms like Indiegogo.    We’ll investigate self-hosted crowdfunding campaigns, like Coin built, and tools like Crowdtilt and Selfstarter.  We’ll keep our eyes open for a new Kickstarter interface that allows multiple rewards selection and quantity input.  As crowdfunding continues to enable innovation and mobile commerce, new fulfillment tools will need to evolve.  Project, anyone?

by Nikki Braziel in Octa

Comments Off on Kickstarter Reward Fulfillment